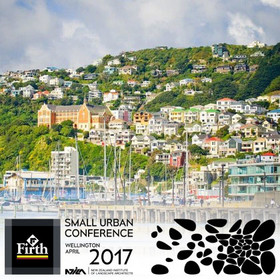 The NZILA Firth conference held in April 2017 had a theme of Small Urban with four sub themes:

In the era of the global, consumption and land prices and mass transit and starchitecture make big cities bigger. Small urban offers a compelling alternative, a resistance to the globalizing trend a mindset that connects the local to the global, especially in Aotearoa New Zealand with its network of small urban landscapes. Networks of the small urban in cities, towns and villages offer a refreshing sensibility for a challenging future.

Lisa Diedrich
Lisa Diedrich studied architecture and urbanism in Paris, Marseille and Stuttgart, science journalism in Berlin, and landscape architecture at the University of Copenhagen, where she received her doctoral degree for her study of site-specific design approaches in contemporary European harbour transformation.

From 1993 to 2000 she was an editor of Topos European Landscape Magazine, from 2000 to 2006 she worked as a personal consultant of Munich’s chief architect at the city’s public construction department. Since 1993, she has also been running her own office as a design critic and consultant in Munich, and since 2006 she has served as the editor-in-chief of the book series Landscape Architecture Europe (Fieldwork/ On Site/ In Touch/ On The Move) and of ’scape the international magazine for landscape architecture and urbanism.

Lukas Pauer
Lukas Pauer is a licensed architect, urbanist, and educator. He is the Founding Director of the Vertical Geopolitics Lab, an un-disciplined non-profit think-tank and speculative design practice dedicated to the interrogation of cross-scalar agency to expose hidden systems and intangible agenda within the built environment.

Recently, he was appointed as Curator of a public program at the Biennale Architettura di Venezia 2016, entitled Branding Islands Making Nations. Besides numerous international recognitions, he was selected as Ambassadorial Scholar by the Rotary Foundation in 2012, as Global Shaper by the World Economic Forum in 2015, and as Swarovski Scholarship recipient by the European Forum Alpbach in 2016 - leadership programs committed to change-making and undertaking of projects to generate a positive impact within local communities.

Vision 42 – the daily grind
Recognizing the erosion of public spaces in neoliberal cities, initiatives such as privately owned public spaces (POPS) and their parasitic relationships are to be interrogated in the Daily Grind project. This hyper-commodified privately owned mobility infrastructure project deploys conspiracy as a form of critique, a deceitful narration of ‘legitimate’ practices that critique the anxious relationship between public space and the rituals of the daily grind. The project accentuates the monotonous everyday commute through heightened commodification’s that instigate exclusionary practices modulated through varying degrees of access.

Luis Callejas
Luis Callejas (Medellín, Colombia) is an Architect and founder of Paisajes Emergentes and director of LCLA office (www.luiscallejas.com) Luis Callejas' practice is focused on the intersection of landscape and architecture. Having obtained diverse recognition in multiple public space and landscape architecture competitions, Luis Callejas was awarded with the Architectural League of New York Prize for Young Architects in 2013 and selected as one of the world’s ten best young practices by the Iakov Chernikhov International Foundation in 2010.

Marco Casagrande
Marco Casagrande graduated from the Helsinki University of Technology Department of Architecture in 2001. From the early stages of his career Casagrande started to mix architecture with other disciplines of art and science landing with a series of ecologically conscious architectural installations around the world. All in all, more than 70 realized works in 14 countries.

He views cities as complex energy organisms in which different overlapping layers of energy flows are determining the actions of the citizens as well as the development of the city. By mixing environmentalism and urban design Casagrande is developing methods of punctual manipulation of the urban energy flows in order to create an ecologically sustainable urban development towards the so-called Third Generation City.

Sandworm
This project is an organic structure/space/creature realized on the dunes of the Wenduine coastline, Belgium. The 45 meters long and 10 m wide and high installation moves freely in-between architecture and environmental art and is constructed entirely out of willow following the local knowledge of a continuing interaction between work and environment.

Elizabeth is on the board of  LSU’s Coastal Sustainability Studio, which features a great mix of scientists, engineers, and designers focused on designing more sustainable systems and increasing resiliency within the region. She has focused on bringing the Delta Region back after Hurricane Katrina and has been involved with the Bayou Bienvenue project that calls for restoration the critical wetland forests that once protected the city.

Couturie Forest and Scout Island for New Orleans City Park
The Couturie Forest is a 62-acre site located within City Park in the heart of New Orleans. The site has traditionally been a bird watching and wilderness preserve within the park, but Hurricane Katrina devastated the forest in 2005. This project focuses on the establishment of a series of resilient infrastructures and highlights the need for re-establishing the ecological systems as well the educational, recreational and cultural systems of a site in the aftermath of a natural disaster.

Viet Village Urban Farm in New Orleans
This project’s genesis was to create a locus for cultural interaction within the local Vietnamese community and has developed into a strategy for sustainable economic development and environmental innovation. It includes community gardens, commercial farming plots, a major livestock facility, market pavilions, play areas, sports fields, recycling center and a major water collection and management system.

Michael completed his Bachelor of Landscape architecture at University of New South Wales and has had now over 25 years’ experience. He and his firm practice within the public domain with a focus on regional and environmental strategies as well as award winning urban design outcomes. They received commissions for Moore Park, Martin Place, Western Sydney Regional Park and the Sydney Olympic Shooting Centre.

Michael also has extensive experience in road design and in recent years he has developed a further speculation in alternative transit modes, specifically in urban cycling.

In 2011 Michael was made a Fellow of the Australian Institute of Landscape Architects in recognition of his commitments to the environment, his on-going participation on industry panels and for services to the NSW Chapter as State President and numerous committees and juries.

Bowen Place Crossing
Spackman Mossop Michaels, in association with Lahz Nimmo Architects, was awarded the commission for Bowen Place Crossing in 2011 after winning a national design competition run by the National Capital Authority.  Located within Canberra’s Parliamentary Triangle, between the National Gallery of Australia and Kings Avenue bridge, the project replaces a dangerous at-grade crossing on busy Bowen Drive with a pedestrian and cyclist underpass.  In doing so, it completes the much-needed final link in the ‘Bridge to Bridge’ loop, a very popular pedestrian and cyclist recreational trail around Lake Burley Griffin.

Moore Park
Moore Park East is one of Sydney’s most important sporting and entertainment precincts. Neighbouring the park are the Aussie (Sydney Football) Stadium, Sydney Cricket Ground and Fox Studios.
Following on from the completion of the precinct masterplan, the design for the bus interchange focused on road closures and a radical shift toward public transport solutions within the park. The bus interchange is located between Anzac Parade and Driver Avenue, with easy access to all major venues. It is comprised of a modular bus station, a loop road extension to the Moore Park Busway and large forecourt area designed to handle crowds of up to 20,000 people per hour. These works allowed the client to reduce the capacity for private car parking in favour of public transport, freeing up valuable parkland to be restored for recreation and sporting use.

Ann Noble
Ann is one of New Zealand’s most widely recognised and respected contemporary photographers with images renowned for their beauty, complexity and the conceptual rigour. Anne is Professor of Fine Arts (Photography) at Massey University Wellington, she was awarded the New Zealand Order of Merit for her services to photography in 2003.

Paul Stanley Ward
Paul is a Wellington writer; his CV lists Oxford, Discovery Channel, NZ On Screen editor and pulling manky rats from traps in Polhill Gully. He is a lifelong bird-nerd and involved in the Polhill Restoration Project.
For the first time in a century rare birds like kākā and tīeke/saddleback are living together with people in Wellington.
The return of Aotearoa’s avian originals into this sweet slice of the Town Belt is courtesy of spill over from the Zealandia Ecosanctuary (ka pai).