Redevelopment of an iconic beachfront park in the Coromandel. Williamson Park has for generations been the heart of Whangamata for it's residents, holiday makers and visitors.

An existing pohutukawa becomes a pivot point for the boardwalk

Williamson Park could be described as the active heart of Whangamata, where every year tens of thousands of holiday makers come to enjoy an iconic ‘kiwi holiday lifestyle’. It accommodates annual events such as ‘Beach Hop’ and is home to a surf club and café.

The Thames Coromandel District Council commissioned the redevelopment of the park to coincide with the removal of stands of mature pines. Past use saw unrestricted vehicle access over the park, a general lack of cohesion between landscape elements and poor pedestrian legibility and facilities. Consultation feedback suggested that any redevelopment should not change the relatively undeveloped, informal characteristics of the park. 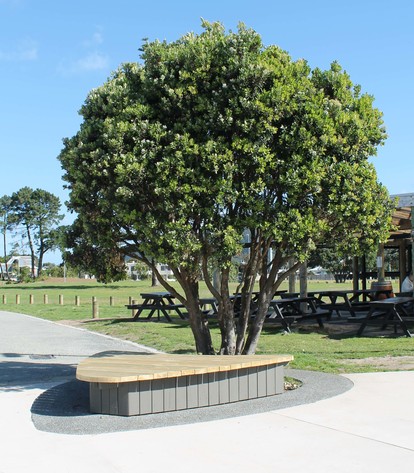 The park road has been realigned to create a larger arena space around the event stage, increase the useable space along the beach front and make a visual connection with a large stormwater pond. Vehicle access was controlled using bollards with setbacks to allow parking on reinforced grass areas. Beachfront pedestrian access was enhanced by a timber boardwalk which also strengthened links into the park and reclaimed a sense of public space between the surf club and beach.

The group of buildings comprising surf club, café, toilets and stage, were unified with paving and complimentary landscape elements. The buildings were architecturally diverse and spatially unrelated which was a challenge in terms of finding a landscape solution to provide unity. The outdoor shower, drinking fountain and bottle filler were clustered within a band of feature concrete falling to a central sump.

The design theme drew upon the environment, using organic shapes and curves. This was conceptually linked to mid-20th Century surfing culture and a mid-century modern design aesthetic. This enabled a design using curves that responded to exiting dune formations, and could bring visual cohesion. Importantly, the design response brings the required sense of informality, and differentiates it from current linear/angular trends in urban landscape.