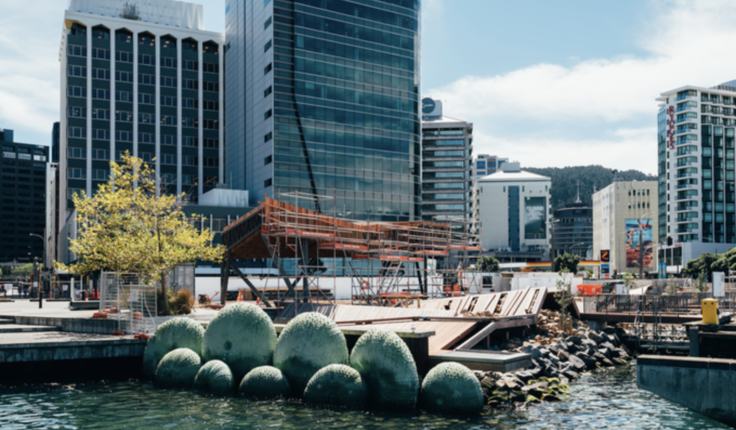 “A beautiful level of craftsmanship and detail with an underlying Pacific feel. The form and scale of the building wraps and envelopes you providing a wonderful communal aspect with the large tables at the threshold of the land and sea. Crafted urban infrastructure.” Best Awards citation

Isthmus’ original plan for the Wellington waterfront at Kumutoto composed two key spatial moves: to push the city out and let the sea in. Now, over a decade on, the project is nearing completion. The latest phase of work – North Kumutoto – extends the laneway, tracing the historic sea wall past new commercial buildings.

While the precinct has evolved since its original plan, it still explores the relationship between land and sea. Findlay Buchanan talks with Isthmus CEO Ralph Johns about the new additions.

Kumutoto’s original premise back in 2004 was to connect Wellington’s city with the sea that surrounds it. It was a time of intense inner-city development where urban culture had liberalised as newly assorted street cafés, nightclubs and retailers continued to grow in the capital city, and so the development ensured there was still ties to the past – and to the natural elements surrounding the city. The 2004 masterplan was developed by Studio Pacific Architects in association with Ralph Johns.

North Kumutoto is situated to the north of Queens Wharf, an integral link between the city and the working harbour. It features a series of public spaces for leisure activities that look to add more vitality to the waterfront.