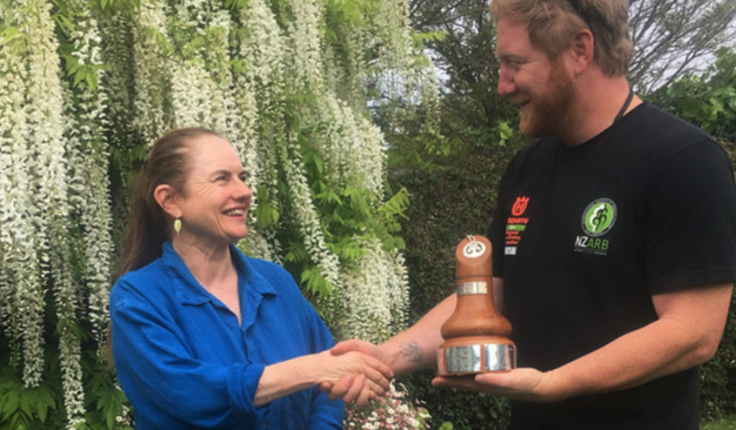 Nominations now being accepted for the 2022

The Ronald Flook Award is an accolade given to elevate and recognise high standards of practice in Arboriculture, including tree raising, tree health and management, and amenity tree protection or design. The recipient will have demonstrated exceptional management of trees, whether functional or aesthetic in any stage of development.

NZ Arb have named this award after well-known, Nelson-based Landscape Architect Ron Flook for his tireless contribution to Arboriculture in New Zealand through the Notable Trees Scheme and the development of the Standard Tree Evaluation Method (STEM).

This award also recognises the high standard of his professional work and the way he used trees as significant features in his landscape designs. Nominations for this award are called in June of each year, with the successful nominee notified in September.


The Ron Flook Award History
This award was established in 1993. Its purpose was to create an award for the development of arboricultural design in New Zealand. This was seen as having great potential for the fledgling NZ Arb, as it grew in stature in the public domain. The Award was expected to draw public and media attention to NZ Arb. Furthermore, recognising excellence in any field of endeavour is fundamental to the role of any professional organisation and none more so than arboriculture. While the early emphasis of the award was for design in arboriculture, in 2006, this was broadened to also include acknowledging excellence across the field of arboriculture. In 1994, the award was first presented at NZ Arb Conference in Rotorua by Frank Buddingh’ – Past President of NZ Arb. Frank was the originator of the award that was approved by the Executive at that time. He had a trophy created at his own expense, which included a bone carving to be presented to the recipient. It was named after Ron Flook; well known to arborists as a firm supporter of NZ Arb, since its inception in Hamilton in 1989. In his design work, as a landscape architect, he was responsible for many urban open space and tree planting projects at a national level. Historically, Ron paid for the bone carving and donated a cheque for the recipient. However, since Ron’s passing away in 2006, NZ Arb now sponsor the annual carving with the $500 winner’s cheque generously gifted by Cindy Flook. The trophy is presented at the NZ Arb Annual Awards ceremony.