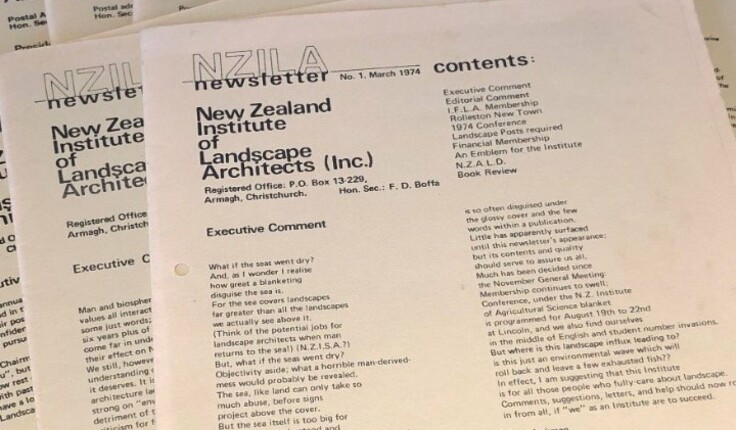 The NZILA Newsletter which launched in March 1974.

Celebrating, debating issues affecting the profession and communicating with members has involved an evolutionary process for the Institute in its 50 year history, and one of the key ways it has achieved that has been through its publications.

Less than two years after it was established, its first publication, the NZILA Newsletter was launched in March 1974. Speaking 20 years after it was launched, landscape architecture pioneer Charlie Challenger called the newsletter a “homespun affair, printed on brown paper that would have done credit to the recycling attitudes of today.”

Then in September 1976, as founding editor, Challenger launched “The Landscape.” The NZILA journal aimed to be "a valuable means of maintaining contact with developments in the overall field of landscape architecture"

“The Landscape” set out to reflect the attitudes of people working in the landscape field, both here in New Zealand and overseas. “It shows trends, it illustrates deeds. It will keep you up to date in this advancing field."

But delving through the archives you get the feeling keeping the journal alive was anything but easy. Challenger wrote of a publishing crisis in 1980 and 81.

“If you look at issues number 10 and 11 of "The Landscape" you will see they were set up on a typewriter. Part of the crisis which Earl (Bennett), Jan (Woodhouse) and I faced with issue 11 was … the major difficulty of obtaining adequate content. A faithful few gave consistent support, the rest was like getting blood from a stone.”

Jan Woodhouse says for a number of years she was Challenger’s “technical assistant,” helping to layout “The Landscape” at Lincoln University which was compiled by Christchurch NZILA committee members.

“In the late 70’s, early 80’s we literally did this on a drawing board using set squares, a stanley knife and glue, paying particular attention to ensuring there was enough white space on each page and no orphan words.”

She says it was “low tech,” each issue a real labour of love. But to this day Jan is very proud of the creativity and professionalism the team brought to “The Landscape”.

She says the quality of writing from contributors within the profession was extraordinary and made a major contribution to the ongoing education of both landscape architects and allied professionals at the time.

By January 1982 the journal was changing. Responsibility for production moved to Wellington under the editorship of Frank Boffa who was joined on the editorial committee by Boyden Evans and Julia Williams, and the journal was commercially produced.

The then NZILA President Neil Aitken wrote in the Issue 12 editorial that the changes were much more than just location and personnel. 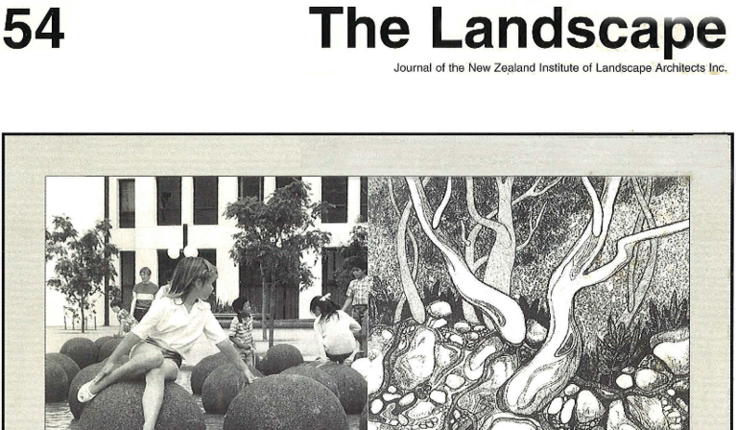 The final edition of “The Landscape.” 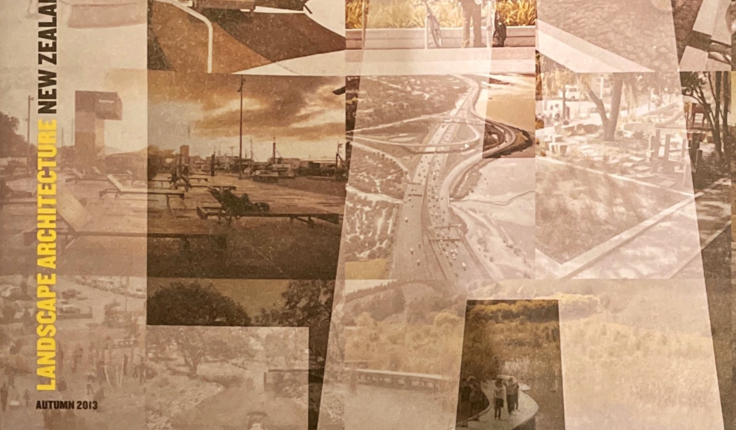 “I believe it reflects a change in attitude and outlook; a change that was influenced profoundly by the Institute’s 1981 Conference “New Zealand Where Are You?”

By 1987 the journal was going from strength to strength. NZILA Awards judges agreed – with issue 32/33, a special double edition devoted to conservation and development, winning the inaugural Charlie Challenger award.

But it was not to last. It was Charlie Challenger himself who heralded the end of “The Landscape” with an editorial in the Winter 1994 issue.

“As the founding editor of the institute it saddens me greatly that the continuity with the institute’s publications represent have reached an end with The Landscape No 54.

A hiatus in NZILA publishing followed, but not for long. A campaign to get AGM to produce a magazine devoted to the landscape architecture bore fruit.

The first edition of Landscape New Zealand came off the presses in January 1996 under the editorship of Barbara Glennie with oversight of an editorial committee comprising members of both NZILA and the Landscape Industries Association of New Zealand. (LIANZ)

Six issues were produced each year and the magazine was partially funded by both the NZILA and LIANZ and sent to members of both organisations.

The magazine covered the annual awards of both organisations and also initially carried lists of members in private practice and lists of the educational facilities which ran courses in either Landscape Architecture, Landscape design or Landscape construction. It was also available commercially.

Production of Landscape NZ became quarterly in its later years. In 2005 AGM was sold and the magazine’s name was changed to Landscape Architecture New Zealand. It underwent another facelift, moving to a different format with a stronger design ethos.

Michael Barret became editor in 2010 and under his direction the November 2010 edition won a National award for cover graphics in 2011.

LIANZ left the magazine in 2008 and the NZILA continued alone under successive editors until the beginning of 2016 when AGM advised NZILA that it was no longer commercially viable for production to continue.

The NZILA went on to produce three digital magazines in-house before launching Landscape Architecture Aotearoa (LAA) in 2017 which you are reading now and which includes video content.

Since 1995 Lincoln University has published the Landscape Review – initially under the editorship of Dr Simon Swaffield, then up until 2021 Dr Jacky Bowring and now Dr Gill Lawson.