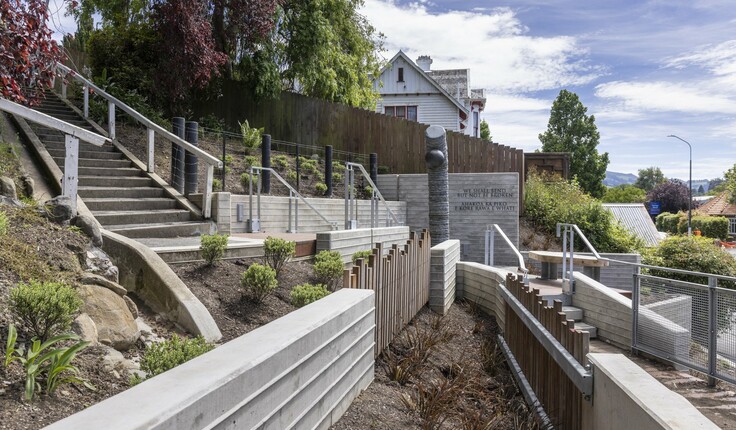 The design is a collaboration between Baxter Design Group and Sculptor Shane Woolridge.

The opening last October was a culmination of a decade-long campaign. The memorial sits on a site at the junction of George and Albany Street on a small reserve provided by the Dunedin City Council.

The design is a collaboration between Baxter Design Group and Sculptor Shane Woolridge and is a fusion of sculptural and urban design skills which has resulted in a site-specific garden purposefully created to take advantage of the site’s characteristics.

The garden provides a setting of textured concrete walls and native plantings in which Woolridge’s monumental abstract sculpture is set.

The team at Baxter Design say they drew inspiration from the life and writing of Archibald Baxter, the primary inspiration for the site design being the brutal, broken elements of trench warfare, including concrete and timber palisades, with a raw quality symbolic of the character of the trench landscape of the front line of the 1st World War. 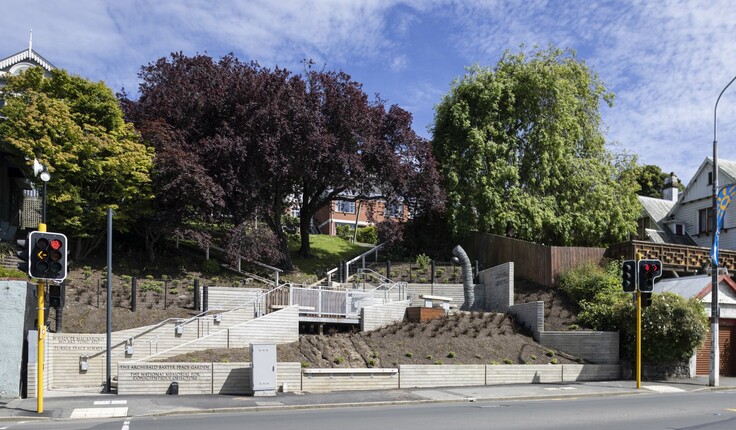 “It was an opportunity to engage with WW1 history and a close connection for me with my grandfather, who opposed the war in his own way, but had three years in the trenches at Passchendaele.

“A very tight and high profile site and an opportunity to add to the urban fabric of Dunedin. We particularly enjoyed working closely with the memorial trustees, a passionate group who made the whole process especially rewarding,” says Paddy.

He’s very happy with the finished project saying is a “story well told and the site is now well used.”

“One of the goals of the project,” says Paddy, “was acknowledging that the site is a well-used pedestrian route first and foremost and that had to remain a primary design goal. The new seating in that space (there was none there before) is well used by the public, looking over George Street and further to the east.”

Heritage New Zealand says Shane Woolridge’s sculpture, entitled We Will Bend but not be Broken, is brutal and visceral and reflects a practice of what would now be considered state-sanctioned torture, a stark representation of Field Punishment No. 1 which Baxter endured on the front lines.

Archibald Baxter is quoted as saying "I have suffered to the limit of my endurance, but I will never in my sane senses surrender to the evil power that has fixed its roots like a cancer on the world.”

Heritage New Zealand says the memorial honours all those who stood by their convictions and is a compliment to the many memorials that commemorate those who went to war.