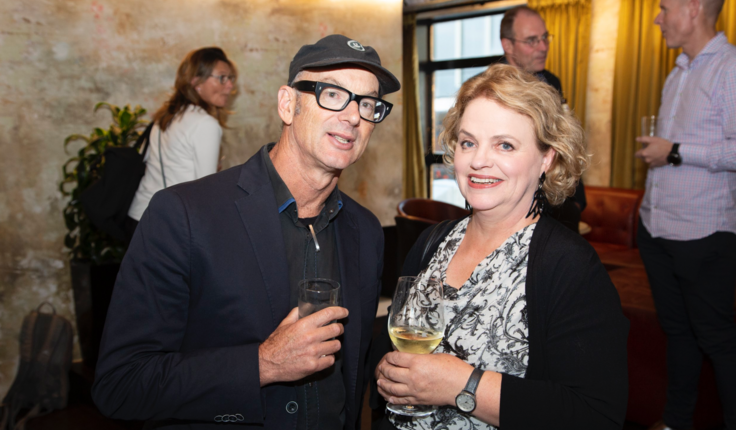 Dr Jacky Bowring with David Irwin from Isthmus at the NZILA President’s cocktail evening in 2019.

Dr Bowring says she was “absolutely amazed” to be named winner and says is an important milestone for the landscape architect profession as it reminds people that the profession is not just about science and construction.

She says she hadn’t actually considered winning the prize, but felt the competition was a good opportunity for her to put in writing some concepts she had been mulling over.

‘The Gallery has an important role in publishing on art and ideas, developing new ways of understanding and talking about the visual arts in New Zealand. We also actively set out to nurture critical and creative thought about the visual arts and to support new writing and writers.’ says Lacy.

‘The Michele Whitecliffe Art Writing Prize was created with the intent of invigorating discussions about New Zealand art and culture. It is pleasing to see a controversial and provocative exploration on public sculpture as the inaugural essay, ‘Art Therapy’, by Dr Bowring.’

The Prize aims to draw out critical voices and to refresh and strengthen discussions about art and culture. Writers were asked to respond to the theme of ‘well-being’ in their essays.

Charles Darwent was the independent judge. He was the art critic for Independent on Sunday from 1996 to 2013, is a regular contributor to The Guardian, The Art Newspaper and ArtReview. He is also the author of Mondrian in London (2013) and Josef Albers: Life and Work (2018).

‘Art Therapy’ opens with a challenge to accepted wisdom: What if art is actually not therapeutic but harmful? It is easy enough to catch the eye with a snappy first line, far harder to sustain interest having done so. What impressed me about ‘Art Therapy’ was its consistent and intelligent sacrificing of sacred cows. There was no falling back on easy assumptions, no reaching for critical jargon. The essay’s authority comes from the originality of its thinking. It needed no dressing-up,’ says Darwent.

‘Hearing about the competition was the perfect catalyst for me to write about a lot of the things I have been reflecting on in relation to statues and public art’, says Dr Bowring.

‘As a landscape architect I’m really interested in public spaces and how they are a mirror of culture in many ways, including how statues are so potent in their weighty symbolism. I wasn’t sure if that was what was meant by “art writing”, so it was amazing to hear my work had been recognised by a judge with such mana in the field.’

Darwent adds, ‘The piece is also not afraid to entertain. It talks about a lived experience – of civic sculpture, wonderfully (and usefully) redefined as “compulsory art” – in a language that is both lively and lived-in. There is an undertone of absurdity that animates the piece, its ideas, like the statues it engages with, moving around as on a chessboard. I hugely enjoyed reading this essay and came away thinking differently because of it.’

‘In many respects, it is the perfect year for this inaugural art writing prize, as we have a little more time to reflect and appreciate what is being written. I feel very strongly about the arts, and it was something that my late husband Greg was extremely proficient in. He contributed regularly to arts magazines and papers, presented papers to arts conferences around the world and was just getting into writing and painting about his Māori heritage and his ancestors when his life was cut short. This award has been set up in his memory to acknowledge everything he has done for the arts in New Zealand,’ says Michèle Whitecliffe.

’Setting up Whitecliffe College of Arts & Design was a courageous action and one that has benefitted thousands of students in the arts. Whitecliffe College of Arts & Design has become a household name, but still we need more support in the written arts and this is why I am thrilled to be working in conjunction with Auckland Art Gallery. I wish to congratulate Dr Jacky Bowring on her work and look forward to seeing many more articles being written on and about the arts in New Zealand.'

About the Prize
Greg Whitecliffe (Ngāti Pikiao) (1954–2001) was an artist, educator and co-founder of Whitecliffe Art School (now Whitecliffe College of Arts and Design) in Auckland, Aotearoa New Zealand, an accredited degree-granting private college. He pursued an active career which varied from professional development in higher education management at Harvard University to stone lithographic workshops in Switzerland. He qualified with a Bachelor of Arts, two Masters degrees, a post-graduate course at Harvard and was working towards a PhD up until he died in 2001.