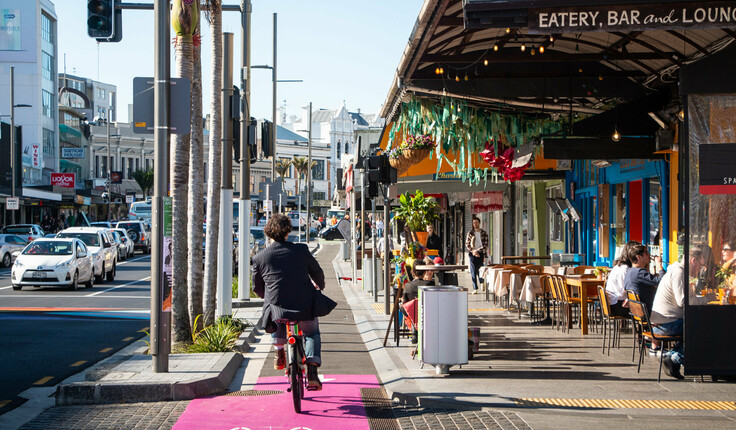 The LandLAB team says improvements have delivered a holistic public realm upgrade to one of Aucklands most iconic streets. Image credit - LandLAB.

Auckland Council says before the current lockdown Karangahape Road was the best performing Business Improvement District (BID) of the 50 across the super city, and the recent enhancement programme by LandLAB, the council and Auckland Transport is being credited.

Mayor Phil Goff is pleased the upgrade was having a positive effect pre-lockdown.

‘It shows by making our urban environment more accessible, people friendly and inviting we can encourage more people to the area to spend time and money at shops, restaurants, cafes and businesses.

“Everyone benefits when we make our city a more vibrant and exciting place. “

In June, the Minister for Transport Hon. Michael Wood and Auckland Mayor Goff joined mana whenua to celebrate the completion of the Karangahape Road Enhancements project.

The upgrades to Karangahape Road make the iconic street more pedestrian and cycle-friendly, attractive and environmentally sustainable, Transport Minister Michael Wood and Auckland Mayor Phil Goff said at the formal celebration of the completion of the Karangahape Road Enhancements project.

LandLAB’s Cory Manson was the lead landscape architect for the project. He and his team say improvements have delivered a holistic public realm upgrade to one of Aucklands most iconic streets.

The brief of a cycle lane along the kilometre length of Karangahape Road expanded into broader public realm improvements, acknowledging the unique heritage of the street and its diverse community.

He says the intent was to transform the street to be a destination rather than just a transport corridor, by integrating different transport modes in a cohesive way.

“The integration of these modes with the street’s existing character required extensive design research and an innovative consultation strategy. The project has reallocated space within the street to support walking, cycling and public transport as priority modes. It increases the provision of non-vehicle public space from 30% to 50%.”

Manson also says that as a uniquely diverse community, “consideration was given to how best represent this sense of place within a street upgrade.

“An approach was formed that the street should be simple, cohesive and robust, urban and of high quality, and most importantly, provide the space for the community to use the street to its fullest. There was strong community feedback that the identity of Karangahape Road was not necessarily with the street itself – but the people and community that inhabit it.”

He says pre lockdown it was great to see how the improvements were working.

“The cycleway provides space not just for cyclists and scooters – but additional footpath capacity for when kids are leaving school and in evenings when bars are operating. That introduces some negotiations with those using it to cycle – but also reflects the approach that this is cycle infrastructure within a thriving high street environment. The finished project has been a long time coming, but local feedback on the quality, the planting and new trees has been really positive. The project has meant that parts of the street which hadn’t had investment are now places people are enjoying and spending time within.” 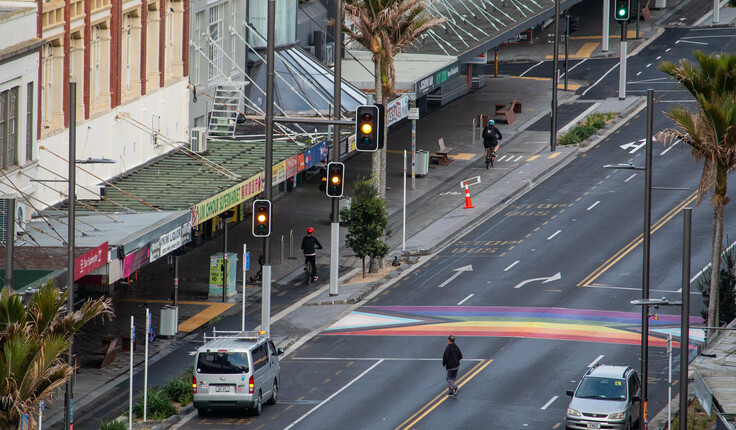 LandLAB says the intent was to transform the street to be a destination rather than just a transport corridor. Image credit - LandLAB.

“The upgrades to Karangahape Road make an iconic street even better. They mean people can safely walk and cycle in the city, which will help people leave the car at home - reducing congestion and emissions,” Minister Wood said at the June opening.

“The Climate Change Commission’s advice highlighted one of the ways we need to tackle climate change is by encouraging more people to walk or cycle, which projects like this do.

“We want to see more of these kinds of projects across the country that support our economic recovery by creating jobs, while at the same time helping us move to a zero-carbon economy.

“The Karangahape Station is expected to be a key transport hub as part of the City Rail Link when it is finished in 2024. With the rail network doubling in capacity, more people will soon be walking, cycling, scooting and connecting to buses through this area.”

Waitematā and Gulf ward Councillor Pippa Coom is also happy with the enhancements.

“This project has created a stunning streetscape with new trees, artworks and street furniture. It builds on Karangahape Road as a unique destination that supports the diverse local community and the many Aucklanders that visit.

“The expanded footpaths and separated cycleways have also future-proofed this iconic part of Tāmaki Makaurau, to ensure it is a well-connected and welcoming destination for the thousands of people who will be using Karangahape Station when it opens in 2024,” she says.

Mary-Jane Daly, from the Auckland Transport Board of Directors, says Karangahape Road has always been one of the best-connected areas in Auckland.

“By 2024, with the expected completion of the CRL, it will be even easier to get here. The recently completed work looks towards that future by providing wider footpaths for the additional people expected to come to the area and makes it safer for those who want to come here by bike.”

Another highlight of the Karangahape Road Enhancements project is an increase in the number of artworks, particularly around the overbridge.

The Karangahape Road Enhancements project was a joint project between Auckland Council, with funding from the City Centre Targeted Rate and Auckland Transport - with some funding from Waka Kotahi (NZTA).

It aimed to preserve the road's unique character while creating a street environment that supports the local community and meets the needs of a growing population.