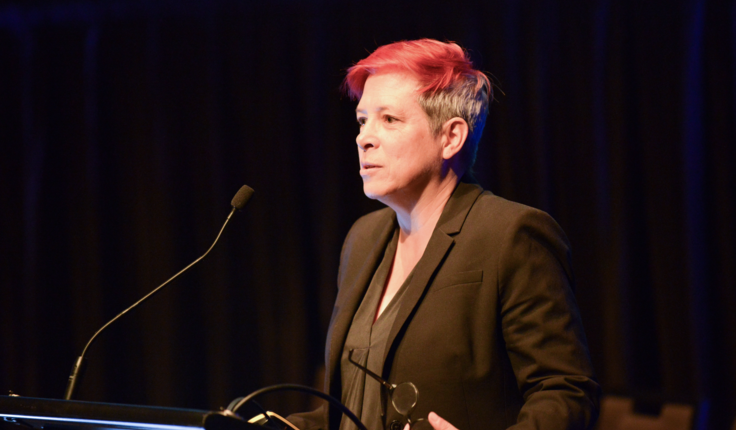 Dr Hill at the NZILA Firth conference in Christchurch in November.

If anyone in the audience for Dr Kristina Hill’s NZILA Firth conference presentation was house hunting they’d be heading for the hills, not the coastline.

She typically works in multidisciplinary teams working on adaptation strategies through urban infrastructure design. And she had a stark warning for conference attendees about the dangers of groundwater levels, particularly in earthquake prone cities.

Over the last 24,000 years earth has seen rapid sea level rise, Dr Hill said. But since man has been here, in the last 8000 years, there’s been a slow rise. So we’ve developed our cities for slow sea level rise. But with climate change the sea level rise has sped up and we’ve never had to manage, operate or design cities for a phase of rapid rise.

“We don’t know how fast it will rise but we know a lot of change is coming,” Dr Hill says.

That sea level rise will push ground water back up through our “thin crust of urbanisation” , filling underground pipes and challenging building foundations. It’ll “mobilise” any contaminants in the soil, causing serious illnesses like cancer to those living in the flooded areas.

Dr Hill says we can no longer build in conventional ways in places where groundwater tables are rising - cities like San Francisco and Christchurch which are at risk of earthquakes.

“It’s one of the most important variables in whether these structures would survive a seismic event.”

She says high carbon dioxide levels - much higher than humans have ever lived with before - mean we’re basically living on a new planet. “The horse has left the barn and we are waiting to see what that means,” she said. “The question is how quickly can we stabilise our situation.”