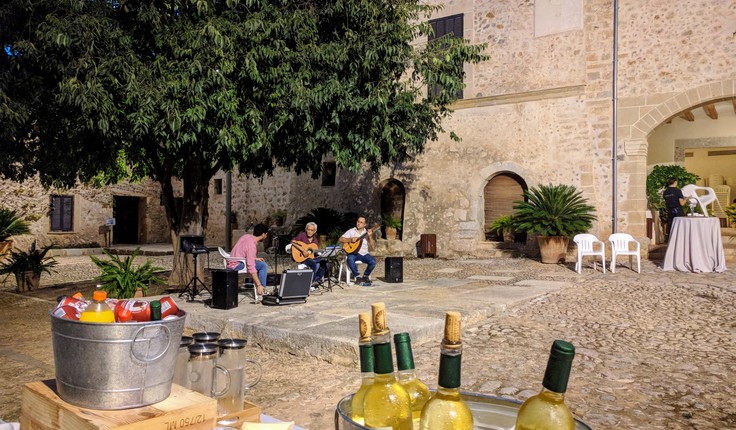 Raixa courtyard: the musicians practice as they wait for the guests 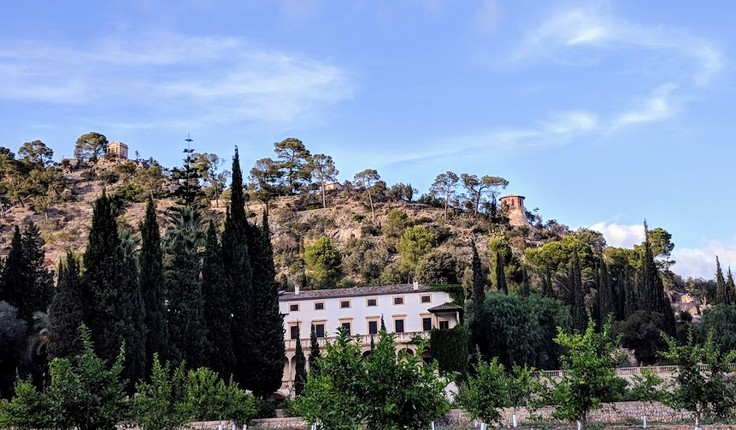 Raixa, the landscape of the Bishops estate, now owned by the Island of Mallorca 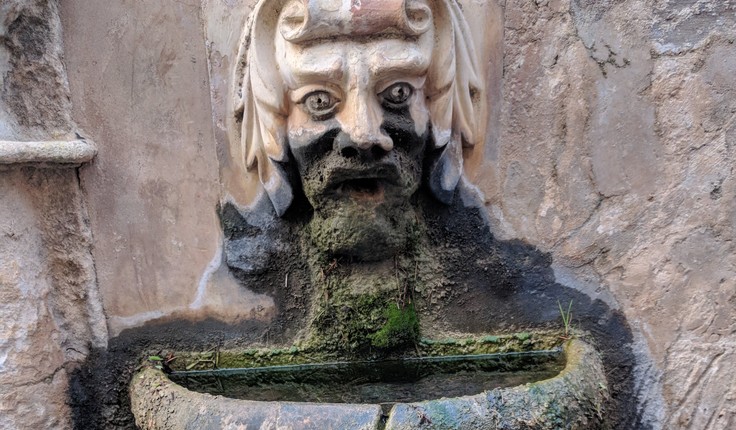 Raixa: stonework found in the garden

Impressions of an observer

Blue skies and balmy warmth were my first impressions of Mallorca. While this attracts beach tourism from Europe, there are other, richer qualities and different tourism potential in the cultural landscape, the terraced olive, almond and orange groves on steep hillsides, the ancient stone streets with narrow winding accessways through old towns, and the cultural history of Mallorca.

These are the impressions gained from a week in Mallorca, the venue for the annual meeting this year of the Cultural tourism committee of ICOMOS. I was invited to join their group for the workshop, particularly because the ICOMOS group I am part of, Cultural landscape, has common interests, and because they were holding a symposium in Marrakesh the following week which most of us were attending. The organiser set out to show the workshop visitors, about 24 of us, his home through the lens of cultural tourism. He had been a previous chair of the island’s tourism organisation and through his friends and contacts was able to show us a diversity of Mallorca that many visitors may not see. We visted the Balearics Islands university to see their tourism faculty, hotel management and receive wisdom on the economics of Mallorcan tourism from an economist.
We were guests of hotels such as the Sheraton Links, as well as of the Governor of the Island, the City of Palma, and a town mayor and enjoyed their warm hospitality as well as their culture. For instance lunches started around 3pm, maybe later, and extended for some 2 hours. I noticed that the Spanish greeting for ‘Good afternoon’, seemed to start being used about 5 pm.

The main city of Palma has had recent, rapid, but height restricted building development and the ancient fortress and cathedral remain dominant, rehabilitated and grand. Move from the intense coastal hotel development to the countryside and the craggy, cultural world heritage site of the Serra de Tramuntana, and a very different experience is gained. Views are both spectacular of the sea from hilltop roads, or shady and intimate in the winding narrow stone streets of the villages. The journey to the mountains may start from the city on a rehabilitated wooden train which celebrates artists with local connections (Miró and Picasso) in its station buildings as well as inside the train. There is also access to the mountains by a road tunnel for cars.

Gastronomic tourism is to be experienced throughout Mallorca: olive, wine, oranges, almonds (almond ice cream, almond cake). We enjoyed the warm hospitality of Ca’n Det, the finca (farm) in the Söller Valley, in the Tramuntana mountains which has one of only three active oil presses on Mallorca. Bartomeu Deyá was our host (the organiser of the workshop) but the mill and finca (farm) have been in his family since 1561. Our travelling group learned to eat the Mallorcan way: first bread with a brush of tomato over the bread, then dipped in oil, and after, the ham and cheeses, with fresh orange juice, also grown on the finca.

On my last night in Mallorca, back in the Söller Valley we ate at a much-loved local restaurant. “Not in the Square. Stay away from the Square,” our hotel host had whispered to us. Visitors though were noisily appreciating the ambience of the Square, we noticed, on our way back to the hotel. It was a national holiday, and one of the back winding narrow streets held a community dinner. Tables were joined some hundreds of metres along, with families quietly relishing the shared fresh food and warm evening. Our boutique hotel host had warned us about his hotel’s ‘deficiencies’. “The neighbours call it the Opera Hotel,” he said. “Not because there is an opera house nearby, but because of the screams of the guests when the showers suddenly go very hot or cold. Let me know if you have any trouble like that,” he whispered. This we realised later was a Mallorcan joke. The hotel was perfect.

The Tramuntana mountains were where Robert Graves had lived and written ‘I Claudius’ and other novels and poetry in a hilltop home overlooking the sea, which we visited; and Anna Nicholas, another writer-escapee from England talked to our workshop group about the attractions of the mountains and Mallorcan culture. She was launching a new book that week and encouraged us to raffle six of her books for night time reading. They were in the spirit of the popular book ‘A Year in Provence.’

The language spoken was a ‘variety’ of Catalan, but different. Most spoke Spanish and many English and other languages, to help visitors. The landscape has been ‘found’ by others who are spending serious money on reconstructing and managing ancient finca and stone mansions. A local land manager for a wealthy owner explained the conflict: coastal production on flat land produces cheaper products. Conversely the maintenance cost of old olive groves and terraces is high, so economics do not favour cultural landscapes in the mountains. Recent wealthy owners though are keen to rehabilitate and maintain the terraces as areas of charm and beauty.

Gaudi, the Spanish modernist architect, contributed to buildings in Palma, including churches and the catherdral, and other artisan skills are evident throughout the island.  Highlights for our group included the wine tasting and lunch at a hard-to-reach finca (we walked for a couple of kilometres), a visit to the ornate cathedral, the Rafael Nadal Experience and training centre (recreation tourism), and an evening exploring an ex-Bishops palace, with landscape echoing Italy, where the Bishop was a frequent visitor.

Low cost beach and sun tourism has transformed Mallorca in coastal areas but the opportunities of cultural tourism which favours accommodation in possessione’s (mansions) and values the richness of the landscape is likely to provide economic support for the heritage of Mallorca as banal tourism moves elsewhere. In addition, as a hotelier explained, the beach hotels are now being replaced by hotels which favour those who expect higher quality: the mature destinations are being converted, and are beginning to reflect the UNESCO Sustainable Development Goals. In many regulatory areas, hotels must be demolished before new can be built.

A final observation was that Mallorca has avoided the landscape barriers of billboards as much of the coastal plain is still accessed by narrow winding gravel lanes. The view to the mountains is the backdrop, not a billboard. 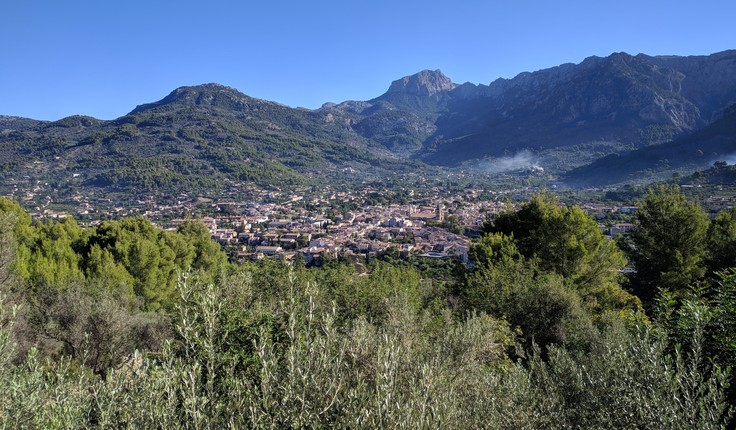 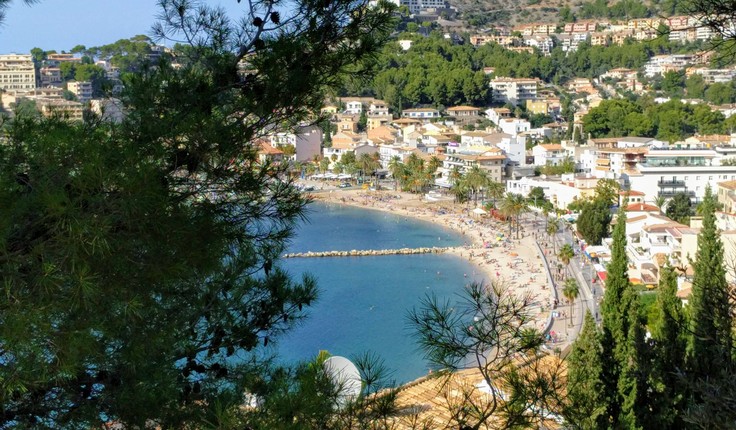