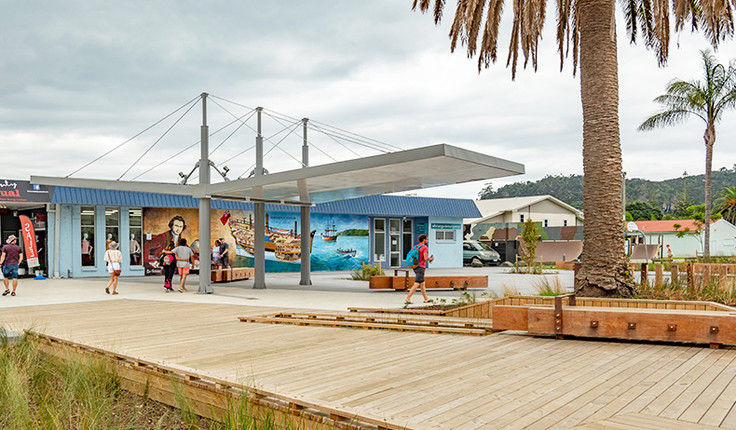 one of the Coromandel Peninsula’s main tourist hubs

Whitianga is one of the Coromandel Peninsula’s main tourist hubs; but outside of the hectic summer months, with a permanent population of just over 5000, it retains its character as a sleepy beach town.

Founded back in the 1830s as a shipping port for timber and kauri gum, over the last century-and-a-half Whitianga’s development waxed and waned with changes in the economy and the seasons, resulting in an ad hoc mix of colonial and contemporary buildings existing side-by-side. The influx of holiday-makers and summer residents creates a bustling atmosphere during the warm weather, but the sidewalk space and public realm amenities fall short of what is needed.

“Planning and research for a comprehensive town centre upgrade began in 2011,” says Mayor Sandra Goudie. “Residents and shoppers were surveyed, and iwi and community stakeholders consulted; but this initiative was put on hold the following year as other projects took financial precedence.”

In 2015 when below-ground infrastructure needing renewing, the local government realised an opportunity to resurrect the project.

Scope and budget were redefined, with $4.7million set aside to upgrade Albert Street — the main retail thoroughfare — through Taylor’s Mistake along The Esplanade to Whitianga Wharf. The work was to be done in two stages, with both stages to be completed before the nationwide commemoration of 250 years since Captain Cook’s arrival in New Zealand in October 2019. Mercury Bay (Whitianga) is one of the four main landing sites along Cook’s journey and will receive nationwide attention during the commemorations.

Stage One works began in April 2018 and involved upgrading underground infrastructure — including water, wastewater, power lines and provision for ultra-fast broadband — along the main stretch of Albert St. The decision was made early on to future-proof the works as much as possible. This included the choice to use segmental concrete pavers rather than poured concrete. This allows individual pavers to be lifted for maintenance works, then re-laid without leaving permanent cut marks or requiring new concrete to be poured.

“The above-ground design brief for the Albert Street upgrade was to create mixed-use space allowing for pedestrians, cyclists and vehicles, and improving accessibility for all,” says project manager Bryan Sanson, a landscape architect at Boffa Miskell’s Tauranga office.

“More al-fresco style dining space would made available to cafés and restaurants, which meant some sections of footpath would be widened from 3-4 metres to 10 metres, requiring the removal of 59 car parks from the main street. This reconfiguration would require buy in from, iwi, the local community and businesses, and residents who traditionally parked in the main street for shopping and socialising,” he explains.

The design is based on themes of navigation and sailing, as a nod to the regions rich history with Capt. James Cook and the great Polynesian explorer, Kupe. Design features reflected the nautical theme in a simple and timeless way and the street elements and furniture use a palette of Corten steel and Tonka hardwood, both materials used regularly in marine environments.

The navigation theme was subtly introduced using long sightlines, changes in angles and materials, and placement of features, all enabling the users to take ‘bearings’ to reach their destinations. These features include the installation of carvings, artwork and pouwhenua (all which are still in the process of being created by local artists).

Due to the regions serene coastal setting, almost all plants selected for the upgrade were native species appropriate to the area and site. 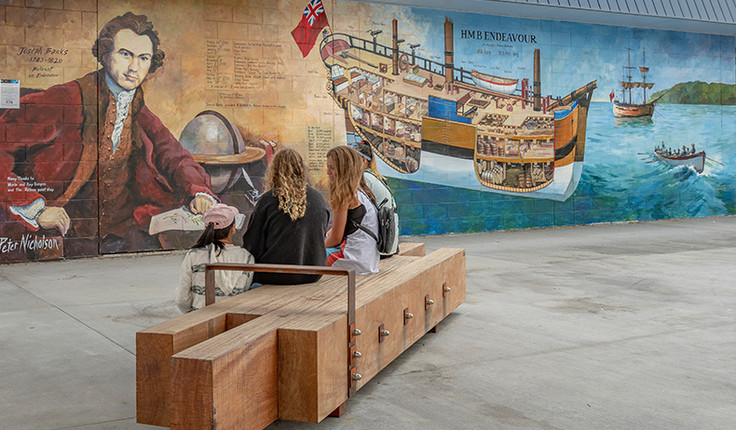 Whitianga Art group member, Peter Nicholson, created this mural on the wall of the Mainly Casual building immediately next to the new Whitianga town plaza in Albert Street. It depicts the Endeavour ship and botanist Joseph Banks (a member of the Endeavour’s crew) 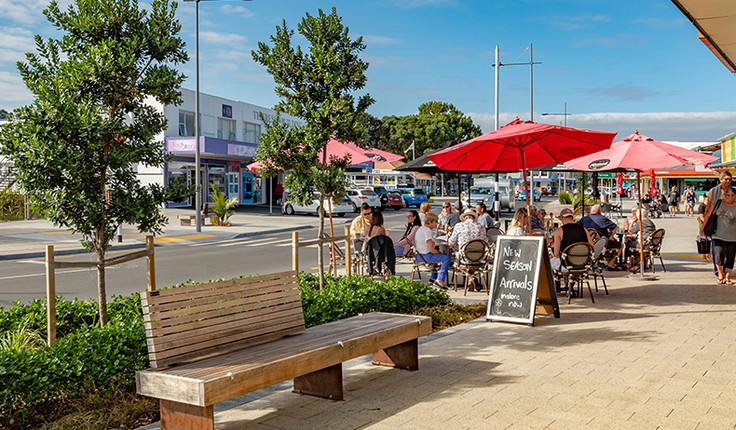 Stage One of the project was completed within budget, and ahead of schedule

“A late addition to the design was the requirement for an overland flow path in the centre of town,” says Bryan. “We decided to celebrate it by constructing a timber boardwalk that spanned the flow path and plant the swale with appropriate native species. This has become a real focal point for the town and helps to keep the space usable all year round and during peak rain events.”

Along with further improvement to the public realm landscaping, a town square and plaza were installed at Taylor’s Mistake. Additionally, Stage One work had to be scheduled to fall outside of the summer tourist season, with a deadline of December 2018.

“We knew that our local businesses would be inconvenienced by the project,” says Mayor Goudie. “But we wanted to minimise the economic impact as much as we could by making sure things were put right in time for the peak summer months.

“We were all in it together — businesses, the project contractors and residents — and we knew that the best thing we could do was support each other.”

“The positive attitude of the local businesses and local government was amazing,” says Bryan Sanson. “And much of that was down to Council’s commitment to open communication and relationship-building, and their extraordinary efforts to make this a real community-based project.”

One opportunity that arose from the construction works was the extensive use of local labour to implement the project. The project partners hired many skilled local contractors, ranging from traffic management, haulage, machine operators, paving installers, and more.

This brought an economic injection into the community during what otherwise would have been the quiet winter months. The local workforce was upskilled, and local suppliers were used wherever possible, further boosting the local economy.

“When you see your neighbours are working on the project, and that the local businesses are supplying the materials, you don’t mind the disruption so much,” says Mayor Goudie.

“The project partners’ commitment to using local people has the added benefit of fostering strong buy-in from the community due to them being so heavily involved in the outcome. Last winter, Whitianga wasn’t waiting for the summer to come — we were busy!”

Even residents not directly affected or involved were kept in the loop. Council’s communications plan sent out regular, relevant updates to the public and so did many of the project partners.

Open communication took place between the project partners, too; and the shared desire to find pragmatic solutions and maximise the outcome meant that Stage One was completed within budget, and ahead of schedule, and celebrated with an official ribbon-cutting and street party.

“By listening to business and resident feedback, having project heroes and supporting businesses, we were able to convert potential negative perception into positive support,” says Mayor Goudie. “Developing strong relationships with iwi, the public and businesses communities delivered not only a physical transformation of the main centre, but a feeling of goodwill and positive ownership by all.” 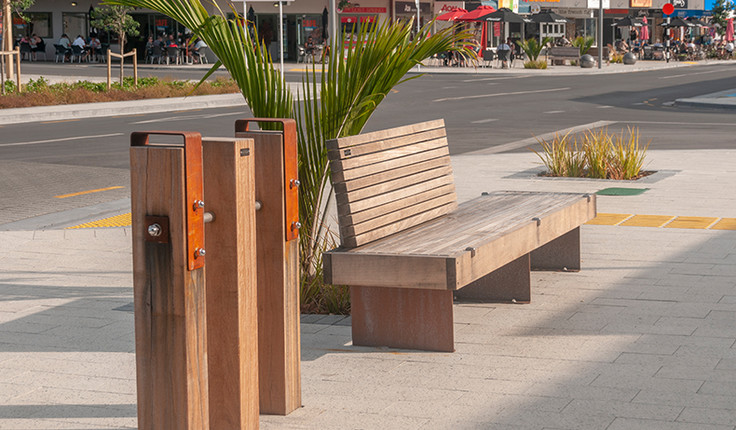