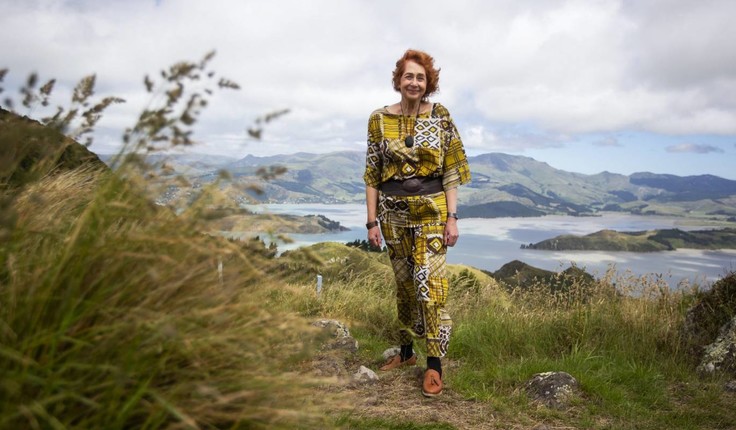 Di Lucas was ‘gobsmacked’ when she got the letter informing her she would be awarded the Officer of the New Zealand Order of Merit in the new year honour’s list. Image credit - Stuff/The Press.

Officer of the New Zealand Order of Merit (ONZM)

For renowned landscape architect Di Lucas, being named in this year's New Year honours list was not something she had anticipated and she’s found it a bit overwhelming.

Di’s the founder of Lucas Associates, which specialises in landscape and environmental planning, and she was awarded the Officer of the New Zealand Order of Merit (ONZM) for her services to conservation over many decades.

She says she got the letter late last year and was gobsmacked. “it’s specifically for my conservation work. It’s because I have been beavering away for a long time in an environmental capacity with a lot of behind-the-scenes stuff. It’s nice to have that recognition.”

Di laughs when asked if the award is going to change anything for her. She is adamant it won’t but adds she’s getting all sorts of messages from people, “including curtsies, bows and doffing,” she says.

Di credits her childhood growing up on Bendigo Station, in the Central Otago high country, with inspiring her conservation work. She says her father managed the station, preserving tussock grasslands with a policy of not ploughing natural land, understanding then the need to retain the biodiversity.

Di was at Otago University doing a science degree majoring in botany. Near the end of her degree she was back at home at Bendigo for a holiday. “I said to my mother, what am I going to do, I don’t want to be in a science lab, I need to be out and about. Mum put her hands out wide and said ‘I wonder if there’s anything in landscape’.”

“Now this is 1971, so I went to the University Library in Dunedin and found out Lincoln had just started NZ’s first course. So I wrote to Lincoln and asked if I would be accepted to the post graduate diploma in landscape architecture and I got a letter back from Charlie Challenger saying I would be but that I would have to go to Ilam, the Fine Arts School, for two days a week and I thought ‘wow, how fantastic is that?”

After finishing the DipLA, Di got jobs with the Ministry of Works (Christchurch, Dunedin and then Hamilton), until resigning in 1979, saying she couldn’t work under the Muldoon government whose primary production subsidies were adversely affecting natural rural landscape and biodiversity attributes around NZ. Following the 1979 establishment of her practice in Geraldine, rurally-based to advise rural landowners, she was in 1982 appointed to the NZ Environmental Council, the government’s policy advisory body prior to the establishment of the Ministry for the Environment. She was then appointed to the Land Settlement Committee managing South Canterbury pastoral leases and in 1987 to the NZ Conservation Authority.

From Geraldine, Di was invited by farmers, Federated Farmers, NZ Farm Forestry Association and community groups to run various rural design workshops, field-days and produce design guides for various rural areas and settlements around NZ. Her office produced “Landscape Guidelines for Rural South Canterbury” in 1981, and this first such NZ guide included a local native plant guide for hills, downs and plains. The team also produced “Woodlots in the Landscape”, a nationwide guide.

Among her many and varied roles Di served as chair of the Nature Heritage Fund, a technical advisory committee to the Minister of Conservation, from its start in 1990 until 2017. In her time chairing the fund it permanently protected about 340,000 hectares of land in some 750 sites around the mainland and islands of Aotearoa NZ. “Areas protected by NHF form council reserves, private trust reserves and private covenants as well as parks and reserves managed by DOC, seeking to together achieve adequate natural landscape and biodiversity representation, connectivity and resilience to be sustainable for the long-term.”

She also served for a decade on Ngā Whenua Rāhui, a fund that assists Māori Land owners with protection of indigenous ecosystems on their lands.

She’s director of Lucas Associates Limited, Christchurch, a Registered NZILA Landscape Architect and Fellow member of NZILA (1987), as well as a former president of the NZILA. Beginning in 1989, and since receiving 15 NZILA Awards, the Lucas Associates team has twice been awarded New Zealand’s premier landscape planning award, the NZILA Charlie Challenger Award, and twice the NZILA landscape planning Gold Award.

This year Di says she is pleased work will take her back more to her beloved Otago and South Canterbury on RMA planning and high country management. She says she will also be prodding government agencies, landowners and the profession for improvements in sustainable rural management.