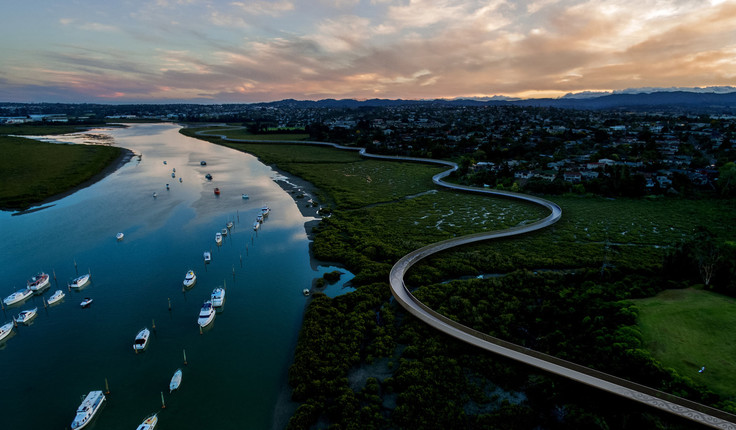 Four New Zealand landscape architecture projects have been shortlisted for this year’s World Architecture Festival, which will be held in Amsterdam at the end of November. Festival organisers reported a record number of entries this year. LandLAB had three projects shortlisted, and we’ll look at them tomorrow. But here’s the Jasmax project Te Whau Pathway, which has been shortlisted in the Future Projects, Infrastructure category.

Te Whau Pathway features 6km of boardwalks and bridges rising above expansive mangroves and tidal flats along the Whau River and connecting the Tasman Sea to the Pacific Ocean. That in itself makes it noteworthy - how many other such structures are there in the world which link one side of a country to the other?

Winding its way through the mangroves the purposeful long slow curves of the boardwalk provide a new pathway for cyclists and walkers connecting local communities to the city cycle network, each other and the rich ecological and cultural heritage of Auckland’s Te Whau River.

But while the project’s been recognised internationally - by being shortlisted for the World Architecture Festival - it’s delivery in Auckland has been stalled by a lack of funding.

Jasmax together with architects Monk McKenzie and engineering consultants Stantec, worked with Auckland Transport, Auckland Council and Mana Whenua to develop a design to meet the aspirations of the both the City and local community representatives. And while the principal part of the brief was to create a commuter pathway between the east coast and west coast running along the western edge of the Whau River, Jasmax quickly saw it was going to be much more than a commuter facility.

“The commuter bit - that was about 20 percent of its actual function,” says Mike Thomas. “We saw it more as a community facility because it’s a labyrinth of cul de sacs and windy roads in that area. To get from one place to another you had to jump in your car and drive for miles on the local road network. Or (with Te Whau Pathway) you could simply drop down to the pathway and walk or cycle along and pop out close to your school or rugby field or place of work.”

The idea is to have plenty of signage along the pathway, embedded into the structure, that tells users where they are or how far they have to go to certain spots. 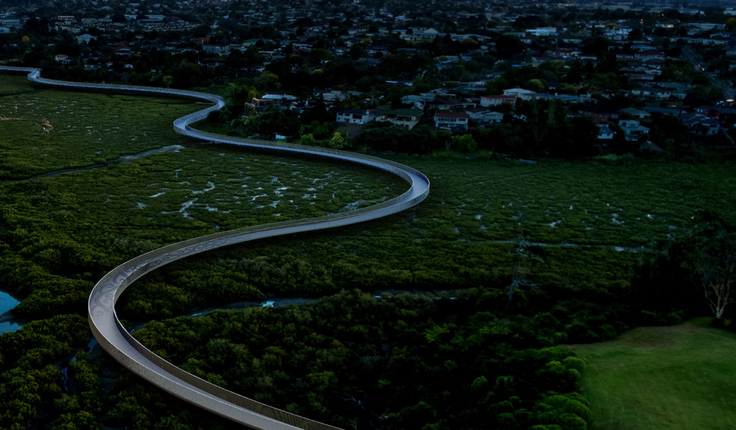 A rendering of how the pathway would look. 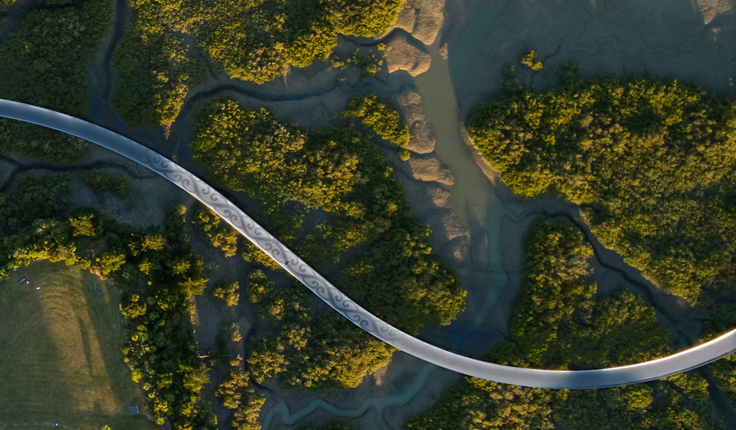 The Maori artwork is indicative only. Further consultation with Manu Whenua is required to come up with a meaningful design.

Nick Scarles, part of the landscape architecture design team at Jasmax, says “the need for the project is unusual in that it has been driven by the local community and has exceptional community support’’. However, one challenge has been trying to get some of the residents who live along the Whau River, on board. “There’s a small community along the river who have had exclusive views out over it, and all of a sudden someone wants to plonk a boardwalk out in front of them,” he says. “The boardwalk would sit above the mangroves - it’s set at a height that allows for the 50 year sea level rise.”

Because of the sensitive marine ecology of the river the pathway would be constructed using a “build as you go” methodology, using a fibre reinforced composite (FRC) instead of timber. It’s only been used once before in New Zealand.

“The problem with timber is it’s treated with arsenic and we are in a marine environment,” says Thomas. “This FRC has a 100 year life and we have designed it so it can be lifted if needed (because of climate change).

“With the engineers and architects, we developed a construction methodology that means we don’t have to take a barge in there or put in any machinery through the mangroves. You can drive a machine along the structure and put in the piles as you go.”

Jasmax followed three main principles when coming up with the design: Go with the Whau - Provide safe, easy to use walking and cycling facilities as a metro route and community linkage to promote healthy lifestyles; Know the Whau - Recognise and celebrate the coastal experience, environmental quality and rich cultural heritage; and One Path, Many Places - One legible Pathway, made in New Zealand within a common defining aesthetic, episodic moments and a high quality recreational facility.

The renderings show Maori art decorating the pathway, but Thomas is quick to point out it’s indicative only, and the team will have opportunity to engage with Mana Whenua and a Maori artist in the future. The design includes lighting incorporated into the handrails so at night it’s illuminated with two long curvilinear ribbons.

Jasmax has to wait until November’s festival to find out if it’s won its category. If it does it’ll then go on to compete for the Future Project of the Year award.