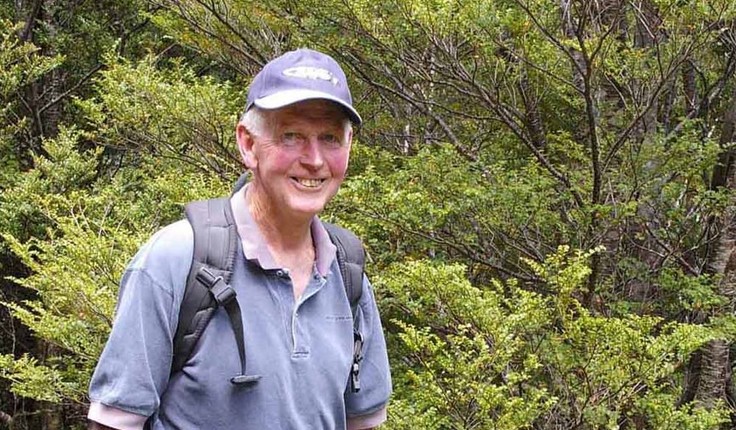 Lawrence (‘Lawrie’) Metcalf was one of New Zealand’s most renowned horticulturists, and a distinguished author and conservationist. He had a special love of the native plants of New Zealand and over the decades wrote many books and gave numerous talks, demonstrations, and lectures, generously sharing his knowledge and experience.

Not only was he known for his knowledge of the native flora, but Lawrie was also an expert of plants from around the world.

Lawrie Metcalf was born in Christchurch, in 1928. When Lawrie was still at primary school (in Form 2 as it was in those days) he was given six native tree seedlings by Lance McCaskill (1900–1985), a notable educator and conservationist. At that time Dr McCaskill was a lecturer in agriculture and biology at Christchurch Teachers’ Training College. Through his encouragement and enthusiasm to grow New Zealand native plants, Lawrie chose horticulture as his profession from this early age.

In 1948 Lawrie left Christchurch for New Plymouth where he worked for one year with New Zealand’s largest plant nursery, Duncan and Davies Ltd.

From there, Lawrie moved to the UK where he found work at Ingwersen’s Hardy Plant Nursery in Sussex who specialised in alpine plants. He stayed there for about a year, after which he spent a short time working with trees and shrubs at Hillier Nurseries, one of the most famous nurseries in the UK. Lawrie then went on to be a gardener at Winkfield Place in Berkshire for two years. This was where the famous British educator, florist and author Constance Spry together with Rosemary Hume were running a Domestic Science School for girls.

Lawrie returned to New Zealand in 1955 to take up the position of Assistant Curator of the Christchurch Botanic Gardens. In 1968 through a restructure, the Assistant Curator position became Assistant Director Botanic Gardens which he held until 1977. During these 22 years, Lawrie made significant contributions to the development and management of the Christchurch Botanic Gardens. His vision, skills and determination focused on establishing the Gardens on a more scientific and educational footing for the benefit of all users – the general public, students, and botanical and horticultural professionals. Lawrie managed a staff of 39 and initiated a sweeping programme to improve the plant collections including their documentation and labelling.

Lawrie devoted a great deal of time to building up the New Zealand Plant Section of the Gardens, particularly through excursions to collect plants from various areas. He collected plant material from throughout New Zealand and also spent much of his time collecting plants in the mountain regions of the South Island. In 1958 and 1960 he accompanied the Canterbury Museum expeditions to remote areas of Fiordland as the official botanist. Lawrie collected live and herbarium specimens which added to the body of knowledge of the areas visited. In 1961 Lawrie spent a month in New Caledonia where he made extensive collections of plants to bring back to New Zealand for both horticultural and scientific purposes.

Lawrie developed and expanded the international seed exchange programme for the Christchurch Botanic Gardens. Exchanges were conducted with more than 300 botanic gardens throughout the world, exporting New Zealand native plant seeds and in return receiving seeds of interesting exotics for trialling and growing on in the Christchurch Botanic Gardens.

In 1977 Lawrie moved to Invercargill to take the position of Director of Parks and Recreation for the Invercargill City Council. Here he had a staff of more than 100 with a further 100 involved in various training schemes to help the unemployed.

Apart from his day-to-day supervision of general parks maintenance, Lawrie instigated large scale improvements to Queens Park. These included construction of a garden area for the cultivation of subantarctic plants (in association with the Roaring Forties display in the adjoining Southland Museum) and using the Jessie Calder bequest to create a special garden area in Queens Park, featuring historic shrub roses, heaths, and dwarf and low-growing conifers.

Lawrie also oversaw intensive development of the 2,000 ha Sandy Point Domain, to make it more appealing and accessible to the public. This involved the planning and construction of walking tracks, park interpretation, enhancement of native plants and other environmental and historic areas within the Domain.

Lawrie commenced the development of Donovan Park as a farm park, along with the construction of a new nursery for propagation and planting up the park. He also oversaw creation of the Sutherland Rose Garden, one of the highlights of Anderson Park.

Lawrie Metcalf was a patient and loving husband, father, and grandfather. He married his wife Lena in 1962, and they went on to have three children, Paul, Sarah, and Victoria. Grandchildren followed, providing a rich and extended home life.

His love of the outdoors, and photographing and collecting plants, led to many family excursions together.

Since his official ‘retirement’ in 1992, Lawrie actively continued his writing and horticultural interests from his home in the Nelson area. At an age when most people have well and truly retired to a quieter life, Lawrie and Lena developed their Stringers Creek property (‘Greenwood’) in Nelson into a large rambling garden full of native and exotic plants, and running a boutique mail order nursery specialising in ornamental grasses and groundcover plants.

In 2012, Lawrie and Lena moved into their new house in Lincoln, Canterbury, to be closer to family. Unfortunately, soon after this new chapter in their lives, Lawrie’s health declined, and in 2015 he went into care at Anthony Wilding Retirement Village in Halswell, Christchurch. He passed away peacefully on the day of his 89th birthday. 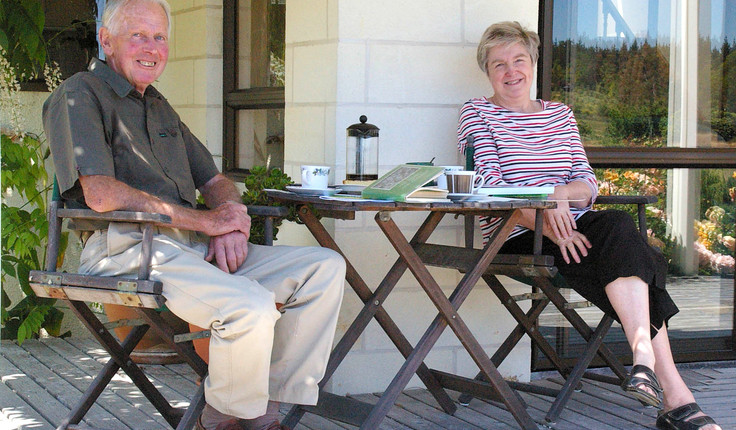 Lawrie Metcalf was a member of the Canterbury Botanical Society, joining in 1955, and was their President for three years. He was also a member of the International Dendrology Society and a Fellow of the New Zealand Institute of Parks and Recreation Administration.

Lawrie joined the Royal New Zealand Institute of Horticulture (RNZIH) in September 1957 and made numerous contributions, including serving on the National Executive. He was an examiner for both oral and practical and written exams for many years. In 1960 he was actively involved in the revision of the National Diploma of Horticulture (NDH) prescriptions.

Lawrie was the RNZIH Convenor of the Nomenclature Committee, responsible for the registration of cultivars of New Zealand native plants, including Coprosma, Hebe, Leptospermum, Phormium and Pittosporum. He held this position of Registrar of New Zealand native genera for the International Cultivar Registration Authority (ICRA) for a remarkable 55 years, since the RNZIH was first accepted as an authority in 1958.

In recognition of his contributions to horticulture, he was made a Fellow of the RNZIH (FRIH) and became an Associate (AHRIH) in 1988.

Lawrie Metcalf has done more than probably anyone else to encourage New Zealand gardeners to use our native plants.

Lawrie’s best known and most enduring book is the iconic The cultivation of New Zealand trees and shrubs, first published in 1972, and so successful that it has been republished and revised more than five times. This outstanding work was a real labour of love, and involved many evenings and weekends of Lawrie taking photographs in the field and making drawings from home, hand-writing the text and botanical descriptions, and Lena painstakingly typing and retyping the manuscript. What a remarkable and inspirational gift they both gave New Zealanders.

Lawrie’s books have achieved such popularity by successfully bridging the gap between horticulture and systematic botany and imparting botanical knowledge in a clear and comprehensible manner. This was realised right from Lawrie’s first book in 1972. In the foreword of The Cultivation of New Zealand Trees and Shrubs, Lance McCaskill referred to Lawrie’s book as being the first comprehensive work since Dr Leonard Cockayne’s The Cultivation of New Zealand Plants, which was originally published in 1923. McCaskill wrote: “But Cockayne’s book has long been out of print, and there has since developed a pressing need for up-to-date knowledge, for an illustrated book that would give us simple but accurate botanical descriptions of our native trees and shrubs, and that would help us choose suitable examples for specimen trees, for groups, for colour, for hedges, for dry places, for wet areas; a book to tell us how to propagate and cultivate them, and how to control pests and diseases. Surely this would appear an impossible task: but Mr Metcalf has achieved the apparently impossible.” This achievement is made all the more remarkable by the fact that Lawrie did not have a formal science background in botany or plant ecology.

To cover more than the trees and shrubs of this first work, books that followed comprehensively showcase native herbaceous plants, grasses, alpines, and groundcovers. Lawrie’s book on native grasses rode the wave of popularity for using them in landscaping, just as his trees and shrubs book heralded the rise in popularity for growing native New Zealand plants.

As part of his cultivar registration duties, Lawrie compiled the major International Register of hebe cultivars, published by the RNZIH in 2001. This 232-page register represents 15-years of painstaking research by Lawrie and is an invaluable and authoritative reference to more than 800 cultivars.

His most recent book, New Zealand native ground cover plants, was co-authored by Roy Edwards in 2014. Until recently, Roy was a long-standing lecturer in horticulture at Lincoln University (he retired in 2017), and their two-year Lincoln-based collaboration was a productive one, filling another gap in the horticultural literature of our native plants.

A selection of titles by Lawrie Metcalf include:

In addition to his books, over the years Lawrie contributed to many local and overseas horticultural and botanical publications.

Lawrie’s passionate plant knowledge will live on through these writings and the inspiration he has given to so many, including myself. It was an honour to know him.